This episode we continue our descent into nonsense. We decipher Lewis Carroll's logic to understand how you can reignite your imagination to create stories that truly surprise your audience.

This is part two of our series on Wonderland and Lewis Carroll. Getting our own heads around this topic was a rather wacky thought process. We hope it makes 'sense' to you, and that you can take something away to give you audiences something new to think about.

Ollie: [00:00:00] Hello This is part two of a series on nonsense. If you haven't already go back and listen to part one, go on, I'll be here. When you get back something we keep coming back to on the show and something we keep hearing from the storytellers we talked to is use what, you know, draw from it. And in our unpacking of the world of Wonderland and Lewis, Carroll's writing.

[00:00:24] Even though we may be exploring the world of nonsense. It's quite surprising how much of his work is based in reality. Carol's work has color, even though the original writing and illustrations had none. Originally, they were printed on a black and white printing press, though. It's hard to imagine Alice's world without coloring in everything in your mind.

[00:00:44] This is down to how much Carol rooted the nonsensical in things you already understand. From there, he was able to twist and warp your sense of orientation. On this episode, we'll be looking into creating your own color, using lessons of Alice's adventures to reignite that bit of imagination you've been hiding for years.

[00:01:10] to build a nonsensical situation. You've got to first build yourself a world or in Carol's case, a land. Wonderland is full of things you understand from wildlife to castles to tea parties. But if I asked you to take me on a tour through Wonderland, you'd find it hard to do most fictional stories. Give us a sense of direction.

[00:01:36] Ollie: [00:01:36] Well gave us a yellow brick road. And while we don't know what we'll encounter on the road, we still know where it's going to end up middle earth gave us a treacherous route to more door. And finally, Mount doom

[00:01:51] Ollie: [00:01:51] In these stories, we have a sense of progress and way points for navigating the world. Wonderland turns this whole concept of a journey on its head at no point in Alice's story, does she know what she's going to experience next? Every new location in Wonderland is seemingly random. It's only when you get to the end that you can look back and examine the adventure.

[00:02:11] You've just been on. The thing is none of these locations are actually linked. They're more thought experiments than anything else. But you can extract some logic from the randomness. You can see the progress each character has made and how it's affected the world. The trick here is to keep your audience so focused on the location.

[00:02:30] They're in that they're not trying to figure out what comes next, because they can't actually see it. This reminded me of an exercise that nine-year-old may faced at that particularly dastardly English teacher put me through. We were given a list of 25 questions. These questions started off in relatively simple fashion from easy maths to general knowledge, as you progress through the questions though, things took a turn for the odd one question would ask.

[00:02:57] Frog is to oven. As blue is to paper. There is no answer to this question, but since the questions before it made sense, you try to make sense of it. Yourself. Another question later in the paper would ask you to stand up and proclaim out loud. What question you are on as you need the end of the paper.

[00:03:13] You're I might have strayed to the last question on the page, which you would find out, just congratulated you for reading the instructions and just answering question one, which was to write your name on the top of the paper. The exercise was designed to get you to read through all of the questions before starting a paper, the instructions at the top of the paper reading, make sure you read through all the questions thoroughly.

[00:03:36] Like the exercise Carol is counting on you. Not skipping ahead because his world is full of unsolvable puzzles. Like my English teachers, you get so hung up on what you're doing, that you get trapped in a moment. World-building works at different scales in the past. We've spoken about building big elaborate worlds, and you need to think about the details to make things link together.

[00:04:17] Don't give them a map, educate them along the way. When you think about Wonderland, it's very difficult to nail down. What anything actually looks like outside of the characters and potentially an object in front of you. The background seems a bit fuzzy. We can't do this with just set dressing. We're going to need a scene.

[00:04:34] Incense whose stories you would have locations, places that feel lifted in nonsensical stories. Things are a bit more theatrical. Even if you're writing a book, you should think of moments as scenes rather than places. Carol first told the story of Alice and her adventure in the Underland to the three little children whilst rowing them on a boat in the opening poem of Alice in Wonderland.

[00:04:58] This day, when Carol wrote up the ISIS river, telling stories was described as a golden afternoon, you can imagine it. A lovely English, sunny day, calm water, the sound of hitting the water and the general creeks or boat makes under the pressure of movement. You can imagine the girls giggling to Carroll stories of weird characters and strange happening in your head or that bringing the twinkle of the sun reflection on the water is already felt just from one simple description, but golden afternoon, this is scene setting.

[00:05:30] It works with something you already know to create an environment we can play in. The concept of a golden afternoon is almost magical. It feels like a cherished memory. Even if you didn't personally experience it is the thing. The first time Carol told the story of Alice, he was in fact on the boat with the children, but it wasn't quite as golden as it was set out to be.

[00:05:52] We're going to loop back to distraction here. This boat trip was actually subject to the most English of things. Rain. It would late to turn out that the fateful boat trip between a storyteller and his audience was actually a rather fordable old rainy day. The story of Alice was designed at the time to distract the children from everything going on around them.

[00:06:13] The story kept them from thinking about being cold from the wet weather scene setting can be a force field. It keeps you focused. This is the best opportunity to feed something to your audience that they already know. A scene sets the boundaries of where they'll try and explore. So keeping it small and focused on the expected, it helps ground them in a place that they are.

[00:06:33] The hottest tea party gives you things to understand, you know, what the table is. You can imagine a tea party spread, you know, about cups and teapots while this tea posts,

[00:06:50] the table. You're hanging on to the thing you understand, and not really trying to escape the scene. Nostalgia as we've explored is deeply rooted in comfort. We're drawn to places that feel safe. So Carol's was logic here is that you're in a wacky world full of strange things. You're going to be obsessed with the normal, not the strange your mind is going to be constantly drawn to the things that feel like you are.

[00:07:17] So you've got a strange world which is full of objects. People understand these are the first two parts of the nonsense equation. And even as well. So what's the wild card. What sets things off in a complete tailspin that this orange you from the normal, how do you create your own nonsense? Alice asks the Cheshire cat who was sitting in a tree wrote, do I take the catalyst?

[00:07:50] Ollie: [00:07:50] at the end of the day, your reality is built by what people tell you about the world. When you're a child, that's what adults tell you. As you grow up, you start to make assumptions from what you've learned from other people.

[00:08:01] So what if you're plunged into, although that makes little sense. Well, you'd, you have to take things at face value. You have to accept what people are telling you. Carol is a master of opposites, and if you want to really understand how to make wonderfully unique. Characters, you need to understand what makes his opposites model work.

[00:08:21] Last episode, we broke open the ACAT. Isn't the opposite of a dog. Well, let's unpack that a little further. A-list didn't think that proved it at all. However, she went on and how do you know that you're mad? To begin with said the cat, a dog, not mad. You've grant that I suppose so said Alice, well then the cap went on, you see a dog growls when it's angry and wags its tail.

[00:08:43] When it's pleased. Now I grow when I'm pleased and wag my tail, when I'm angry, therefore I mad. Jessica cat's logic here is an incorrect, it's just illogical. It doesn't make sense in our perception of the world. When you're telling a story, though, you're not in our world. Storytelling gives you the freedom to do what you want.

[00:09:04] Nonsense. As we've discovered is the absence of sense. We've built a world where things don't make sense and arrange things that do. So the only thing left really is our perception. Carol story talks a lot about madness. Madness here is the old fashioned thinking of anything that was a bit different from the norm.

[00:09:22] Every character. Alice meats has some element of madness, whether it's not having a grasp on their feelings being generally confused or presenting bald analogies thing is, and here's the big secret of all of this. If you're part of a world where everyone you meet is mad, doesn't that make madness? The normality.

[00:09:42] Charles Dalton had a lisp. He felt he didn't fit in. He told stories to escape his reality. He created a mad version of himself Lewis Carroll to be the opposite of the man. He was free from normality. Nonsense is an opportunity for everyone to take break. From accepting things as they appear, it's an opportunity to be curious and to ask questions for a few moments.

[00:10:07] It's your chance to rebel against don't be silly. So often we're pushed back in our boxes, use your power of opposites and distraction to tell new stories, stories that can ask questions and like Carol's did make a mockery of everything in the real world that drives you mad. I'm not crazy. My reality is just different in yours. 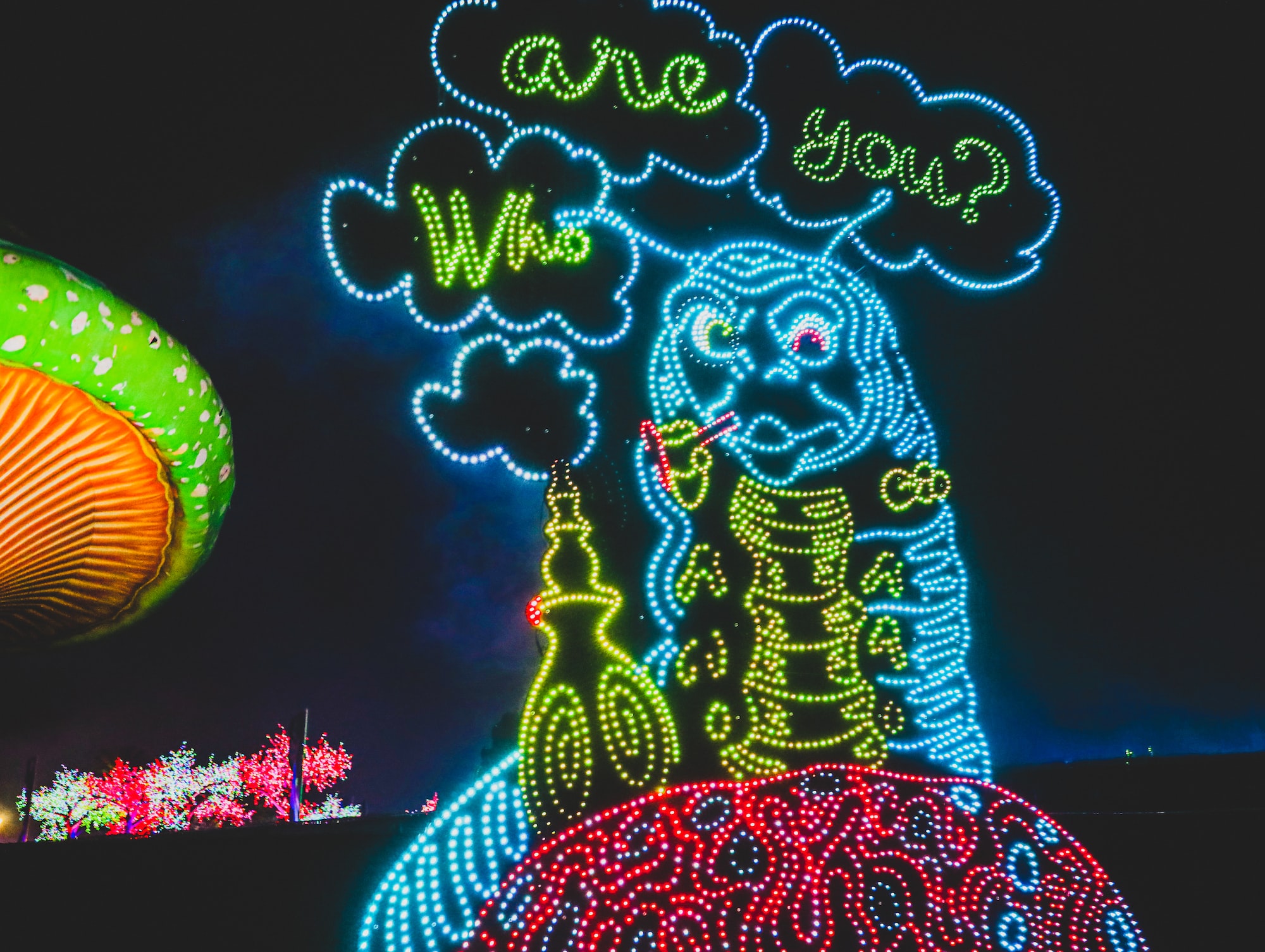