We unpick what makes nostalgia such an effective storytelling tool. Looking at the work of film poster artist Drew Struzan we take you on a journey to find out why sometimes judging a book by it's cover isn't such a bad thing.

This is the first in a series of episodes on nostalgia. When we tell stories the ultimate thing you can do is hold a place in the heart of your audience, it's a mixture of emotion and experience. To work out what sparks this level of connection we looked to the career of Drew Struzan, world-renowned film poster artist. You may not know his name, but you've seen his work thousands of times over the course of your life.

This episode is for you if you want to develop a deeper connection with your audience and learn just what makes someone's heart skip a beat, even after they've experienced your work.

Ollie: [00:00:00] On the show every week, we talk about the things that make up great stories that could be creating worlds, technical techniques, or even finding moments that evoke emotions over the course of the next three episodes. We're going to try and come to terms with something that takes a different form for every single person it's built on your own experiences and emotions.

[00:00:22] When it's tapped, it creates an immediate bond between you and the story. But finding that bond is incredibly tricky. I'm talking about this. The weird, not quite emotion that everyone seems to comprehend, but not really understand where it came from. The best description I've found for how it works is in a TV show.

[00:00:41] Madmen. She's seen the show, you'll know exactly where I'm going with this. In one episode, Don Draper, a high-flying troubled advertising, creative director has to sell a photo slide machine one that when you press the button, the wheel turns at no new phone, which was projected on the wall as part of his pitch.

[00:01:12] Teddy told me that in Greek. Nostalgia literally means the pain from an old wound.

[00:02:17] Ollie: [00:02:17] The interesting thing about nostalgia is that it's made up of the sum of its parts. It's not one singular moment in a story that creates it. It's your whole experience wrapped up in a memory. That memory is just a person's perception of the story. It's not the actual story itself.

[00:02:32] It's what they remembered at the time and what happened to them on this episode, we're not actually going, we'll talk about stories themselves, which we know is strange. That is dedicated to storytelling. We're going to be talking about the thing that got you to the story in the first place, the cover, as much as it's drummed into you, as we're growing up, that you shouldn't judge a book by its cover.

[00:02:53] It's exactly what we do. First impressions are everything in entertainment. So whether it's a book, film or music album, Getting your artwork, right. Is essential. It sets the tone for what people expect from you. It doesn't have to be flashy. It could represent an atmosphere. You're trying to capture that, that cover as time goes on, will become ever more important to the people who liked your story.

[00:03:18] A few years ago for YouTube was spouting trailers faster than you can watch them. And Netflix, wasn't optimizing thumbnails to hope that you might just click their latest Adam's out in the film. There was the movie poster. They still exist today. I collect them myself, but once upon a time, they were just as important as the trailer you see, when we didn't have trailers on tap on the internet.

[00:03:37] The only time you would really learn about a new film was in a magazine in the cinema or at the start of a DVD or a VHS tape. In other words, you had to actively seek out the new, there's also a hidden form of telling you what's coming, but it wasn't that hidden. It was everywhere. When you walked into a cinema on that sticky red carpet, figuring out how you're going to juggle that giant drink and popcorn bucket while walking, what felt like five miles to the screen you're supposed to be in.

[00:04:05] As you walked, every corridor would be filled to the brim. Posters as you're walking down those corridors, these posters do more than just tell you that Danny DeVito is in another buddy cop film coming this holiday. They start to raise your excitement for the story you're about to see in the cinema. And if you happen to stumble across the poster of the film, you're going to be watching that sets off a whole nother level of anticipation.

[00:04:27] I've been waiting for this. And I'm so nearly there, this doesn't just go for movies though. It's the same feeling as going to a record store and flicking through album covers. You're not just thinking about the music that you're going to be listening to, but also what you're going to be doing at the time.

[00:04:41] Are you picking out this album for a date? Maybe it's been a tough week and you just need to get lost in some music. These covers this artwork of the start of a story. They draw you in. They are act one before act one. So we're going to go in a weird direction now.

[00:05:00] What do the BGS black Sabbath earth, wind and fire, and Alice Cooper have in common? Well, during a five-year spell, they worked with a company called Pacific eye and ear.

[00:05:17] Ollie: [00:05:17] struggling illustrator trying to make ends meet who would go on to create images that we associate with some of the greatest stories ever. His

[00:05:34] No, it's in the piece. It's the beginning of that story. It's a storyteller. And that's what makes him very unique and ranks him with the great poster

[00:05:41] Ollie: [00:05:41] artists of all time. Given the option in college by a guidance counselors, they either become a fine artist or an illustrator drew Struzan pick the option.

[00:05:49] He would hope bring him a bit more income. He picked illustration making $150 to $200 per album. Struzan would keep pushing to support his small family. A few years later, Struzan left the album, cover trade and started a company called pencil pushers. He would start creating posters for B movies that you've probably never heard of.

[00:06:11] Clip: [00:06:11] story of a colony of apps will feed other tonic weeks and squirm. This was the night of the Crawley tariff American international presents square.

[00:06:23] Ollie: [00:06:23] During this time though, he developed a style that would start to turn some heads using a combination of penciling and a unique hairbrush technique.

[00:06:31] His posters stood out among the others. In 1978 star Wars was to be rereleased in sinless. Struzan was approached by a friend for some help. Struzan for this project would put down his airbrush and switched to oil painting. What was developed next was what came to be known as the circus poster. Instead of a normal film poster, this one focused on the dirt and mechanics of the star Wars universe.

[00:06:55] The poster itself has a ripped effect with the credit block and small portrait of Obi wan Kenobi stuck on the side. It looks more like a concert poster pasted on the wall, under a tunnel. That's sort of the worst end of a rainstorm. But in true stories and fashion, it was different and caught the attention of someone who had helped drew to find nostalgia for the next 40 years.

[00:07:19] with Lucas's backing as star Wars, his go-to artists Struzan would go on to develop the iconic posters for blade runner. The thing back to the future, Indiana Jones and the E T Struzan had a knack for capturing the atmosphere of a time in movie movie-making and wrapping it all up in a single image.

[00:07:40] Well, many of us think of Lucas and Spielberg as defining our expectation for a movie. It was true sins images at the cinema or on the box that the first thing we experienced every time we came back to that story, while music and visuals hold a lot of our nostalgia. Before we even hit play strengthens art had already triggered on nostalgia just by seeing his cover.

[00:08:01] Our perception of that story is brought to the forefront of our mind and given life, the books cover holds a memory is so much more than just a marketing tool. Students' work as time went on, wouldn't just be a poster. It would be a Mark of quality. All of your favorite films had to style to them.

[00:08:18] Strengthens. When you saw his work, you knew you were in for an adventure. Some of his more recent work can be seen on the. American posters for Harry Potter work that would defined his oil painting style for a new generation and triggered the nostalgia in an older generation. Nostalgia is such an important storytelling tool because it's a container of emotions.

[00:08:38] It's a moment and it's also not it's happiness, but also sadness it's loud and quiet. You may be thinking, okay, I want to create nostalgia for my story, but I'm not stray zone or Lucas or Spielberg. The thing about creating memory though, is that it doesn't have to be a big. A moment more often than not.

[00:08:56] Nostalgia is a moment of comfort in chaos. When you need to remind yourself of a different time or make sense of what's going on around you nostalgia much like storytelling is an escape when I'm on GS. It, it's almost a way of us retelling a story that we enjoyed to ourselves. The thing to focus on, even if it's just a YouTube video or a poem you're writing is the presentation of the journey.

[00:09:20] What would remind your audience of the story? You told them in an instant. The magic of Susan's posters was that they were more of a movie synopsis on one sheet. If you've never seen the film before it generates excitement, who are all these people? Why does one have a light sword? Where's that ship going after you've seen the film?

[00:09:38] It says, it says a reminder of the adventure that you just had with these characters, judging a book by its cover. In some context can be wrong, but more often than not. It's what you project on that cover. On my bookshelf right now, I have a dusty copy of whom is Odyssey. The cover isn't much to look at. I think maybe it had a dust jacket at one point that got lost, but that covers a memory for me.

[00:10:01] It's my dad reading me Greek myths as a child is fighting. Cyclops is and escaping sirens. The thing about nostalgia though, is it's incredibly erratic and strikes at random times. You never know which memory is going to stick with you throughout your life. So next episode, we're going to be turning the clock back and looking at wearness doubt just starts and changes.

[00:10:23] We're going to be diving into the odd wacky and sometimes dark world of children. 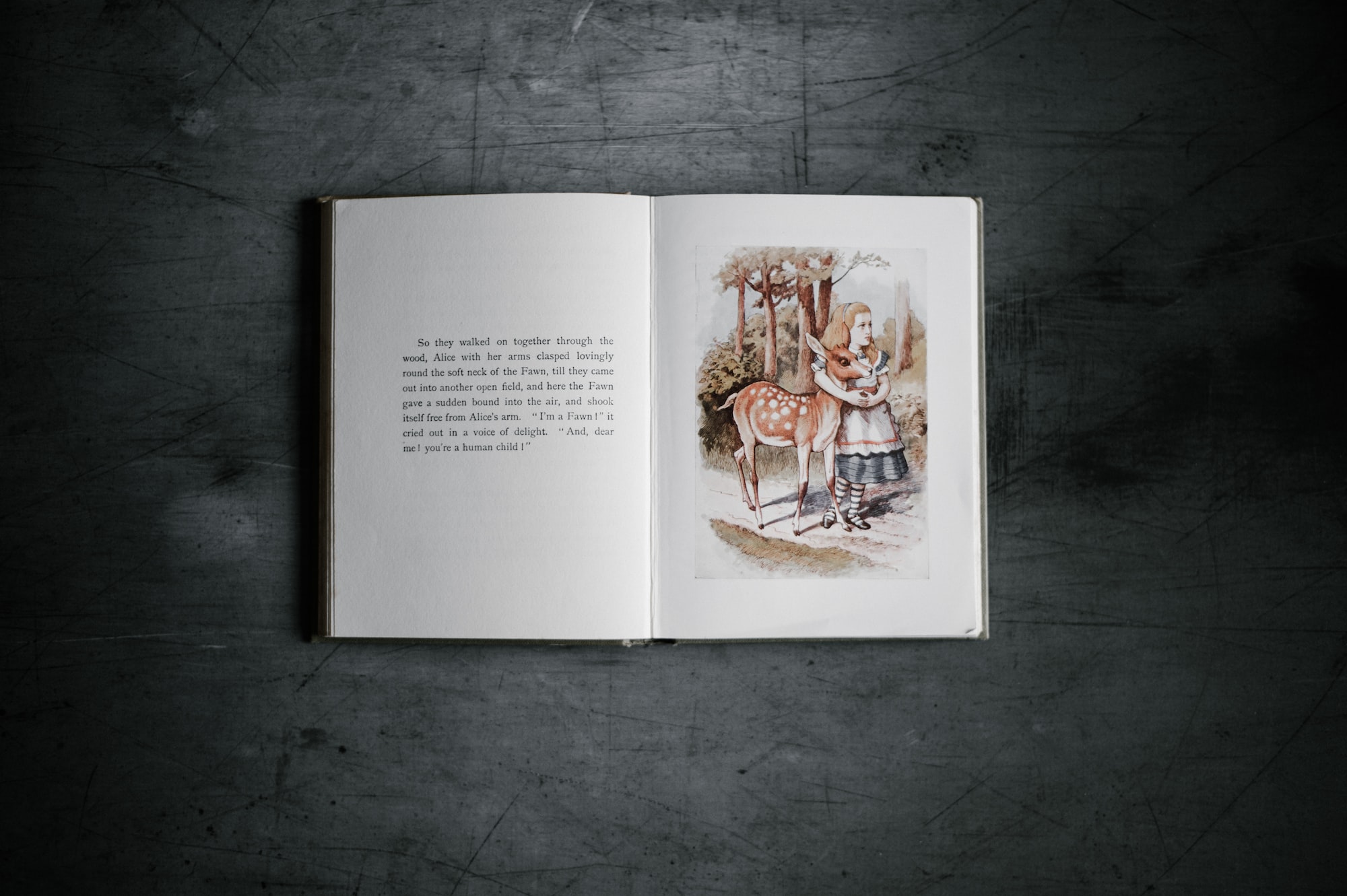